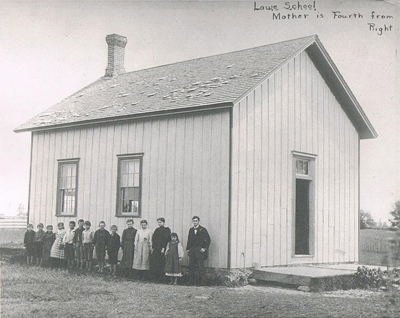 The schoolhouse that is now the home of White Oak Dental started as a one room schoolhouse that was originally located at the corner of Oakley Road and M-52. The house at 2604 was built in 1972 by John and Linda Decker. In February of 1975 the Decker family purchased the Lowe schoolhouse, which was being used as a church at the time, and had it moved to 2600 North M-52 to be used as an antique/gift shop. In 1981 the Decker’s sold the property to the Maliszewski family who resided here for a little under 2 years, when it was sold to Philip and Ruth Dahl.  In 1983 Dr. Dahl opened his practice in the old schoolhouse. The practice was growing and the office needed to expand, so in 2004 five operatories and a new laboratory were added to the schoolhouse. After he had been Dr. Dahl’s Associate for two years, Dr. Daoud took over in 2007.

It was the intent to try to maintain the look and feel of the old schoolhouse, while updating the facility.  The original chalk boards are still in the waiting room and are enjoyed by many of our patients and their children. It was renamed White Oak Dental because of the beautiful White Oak tree that is located at the entrance of our drive.